COLLWEB is a global network of collectors that builds a community of people who appreciate the value of art, cars, watches and real estate.

Her story is out of a fairy tale. Let me give you a taste of it: "My father was a close friend of the Nawab

Of Bhopal (the ruler of Bhopal). In the late 50s, His Majesty, Nawab Hamidullah Khan,

convinced my father Abdul Saeed Khan to buy 500 acres of land in the forests. The Nawab

of Bhopal used to spend his weekend there, hunting for game. When my father moved to

'Daatkho' (my village), it was uninhabited and 20 km. deep in the jungles. You had to cross

seven wild rivers to get there. He was a brave, adventurous man and decided to create his

own world there. He lost his first wife and many decades later, married my Mom and took

her back to Daatkho. We had a huge log house in the middle of the darkest, deepest jungle.

By now, a large group of tribal natives had settled down in our village and worked for my dad. I was

born in the jungle. And raised there for the first 10 years of my life. I was literally a princess.

And my father the king. People from distant villages trudged down the mountain by the

hundreds, carrying burning torches, to celebrate my birthday. I would proudly sit on a cane

high chair, proud like a princess while the tribals would dance all night long around a large

bonfire. I went fishing and hunting with my Dad every day, often coming face to face with a

tiger or a leopard. He would tell me about the time he was mauled by a tiger and left for

dead. I felt so proud of my Dad when he showed me the scars. Despite being away from

civilization, my mom home-schooled us and when I turned 11, much to my dismay, we were

whisked away to Bhopal. I could relate to Tarzan's plight when he had to move to London for

Jane. I felt like a fish out of water. I found the city slickers devious, conceited and full of

hidden agendas and missed the simplicity of my jungle. I missed the animals and their

soothing sounds, the gurgle of the river that put me to sleep like a lilting lullaby…”

A fairy tale indeed!!! Her story begins fascinating and she grows to becomes a wife and

mother. A job she wanted and adored but the fairytale resided within her and was hidden

deep for years until it burst out of her in the form of fine art. Sheeba says, “when I look back,

incredible with my artistic journey!” I invite you to see the colorful movement that is

translated by Sheeba Khan onto canvas.

• Featured as one of the 50 top artists in the international “ARTISTI: The Artbook of International Contemporary Art”.

Chosen out of thousands of artists to be among the top 50 contemporary artists from around the world. (March, 2019). 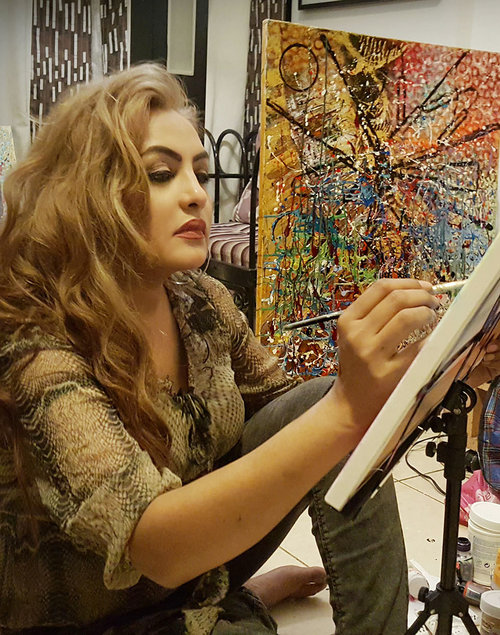